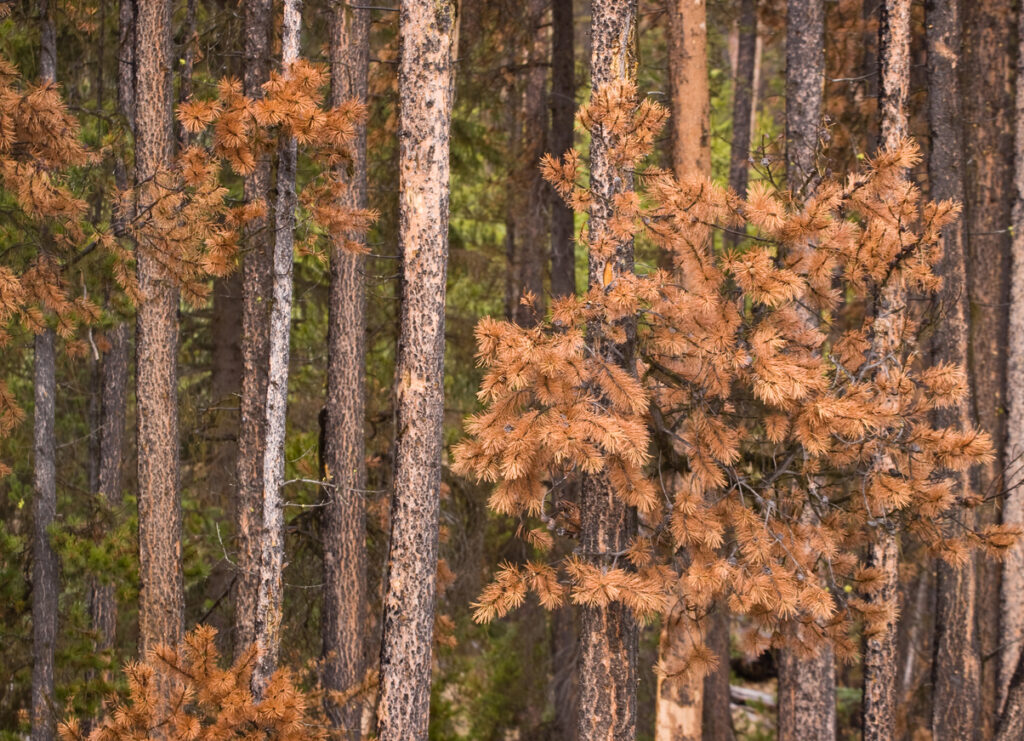 There are no more important forest pests in Georgia than the pine bark beetles, which include some five native species in the state spread across two genera. While both natural and potentially destructive forces at a large scale in the state’s timberlands, pine bark beetles can also impact homeowners in urban and suburban settings, targeting landscaped pines—and, in particular, the stressed, damaged, or dying pines these insects specialize in.

Here at Excel Tree Care, we can help you deal with beetle-damaged pines—and help you prevent infestations in the first place!

The pine bark beetles of the Peach State include the most notorious, the southern pine beetle (or “SPB” for short), as well as the black turpentine beetle and three kinds of engraver beetle belonging to the genus Ips (these are sometimes simply called Ips beetles).

These beetles and their voracious larvae feed within and behind the bark of pine trees. They prefer weakened, injured, or senescing trees; the scent of resin and other olfactory clues draw them in. Trees suffering from drought, root rot, or other disease, trees struck by lightning or burned in wildfire, and trees hampered by overcrowding in densely growing stands are among those most vulnerable to bark beetles.

Southern pine beetles are the most destructive of Georgia’s bark beetles, and indeed the most economically damaging insects in the South. They often attract trees en masse and can kill significant swaths of forest. Most notably impacting Virginia, loblolly, and shortleaf pines, SPBs can be an issue in cityscapes and townscapes as well as timberlands, and may affect multiple trees at a time.

The Ips engraver beetles aren’t quite so destructive, but may also affect groups of trees in one outbreak event. Black turpentine beetles, by contrast—which are by a fair measure the biggest of Georgia’s pine bark beetles—often don’t attack trees in large numbers, and unlike the southern pine beetle and the Ips species they only tend to impact the lower 10 feet or so of a tree trunk.

Signs & Symptoms of Pine Bark Beetles in Your Trees

Pines under attack by pine bark beetles will often show yellowing needles and, on close examination, the resin-leaking holes called pitch tubes. The underside of the pine’s bark often shows the intricate “galleries” the beetles excavate.

Careful scrutiny of pitch tubes and galleries can reveal which beetle (or beetles—multiple species may be at work in a single tree) is responsible, even if you can’t find the minuscule insects themselves. Southern pine beetles create whitish pitch tubes about the size of a No. 2 pencil’s eraser and situated in bark cracks; the pitch tubes of engraver beetles tend to be pinkish and located within the actual bark plates, while black turpentine beetles leave behind comparatively large, obvious pitch tubes with holes as large as a silver dollar. SPB galleries are distinctively “S”-shaped, Ips galleries resemble a “Y” or “H,” and black turpentine beetles produce fan-shaped galleries.

Keeping your pines healthy is the best way to avoid problems with bark beetles. Ensure they receive enough sunlight, properly mulch and water them, and avoid damaging them with, say, clumsy mowing or ladder maneuvering. Make sure pine stands, if you have them, aren’t overcrowded.

While you can and should key into yellow needles, pitch tubes, and other potential signs of beetle activity, it’s best to have a certified arborist assess your pine to determine whether it’s being actively infested.

Pines impacted by southern pine or Ips engraver beetles often need to be removed before they potentially spread the activity to other trees; it may sometimes be possible to deal with infestations caught early by removing impacted boughs. The typically more minor, lower-down attacks of black turpentine beetles can often be addressed with responsibly chosen and applied insecticide.

Reach out to Excel Tree Care for assistance in preventing and dealing with beetle damage to your pines. We’re experts at mitigation pruning and provide skillful tree removal services, whether we’re taking out certain trees to thin a dense-packed stand or a pine badly suffering from a beetle infestation.

We offer free quotes and 24/7 emergency assistance throughout North Metro Atlanta! Get in touch at (404) 964-6508 or at tyler@exceltreecare.com.

We use cookies on our website to give you the most relevant experience by remembering your preferences and repeat visits. By clicking “Accept All”, you consent to the use of ALL the cookies. However, you may visit "Cookie Settings" to provide a controlled consent.
Cookie SettingsAccept All
Manage consent

This website uses cookies to improve your experience while you navigate through the website. Out of these, the cookies that are categorized as necessary are stored on your browser as they are essential for the working of basic functionalities of the website. We also use third-party cookies that help us analyze and understand how you use this website. These cookies will be stored in your browser only with your consent. You also have the option to opt-out of these cookies. But opting out of some of these cookies may affect your browsing experience.
Necessary Always Enabled
Necessary cookies are absolutely essential for the website to function properly. These cookies ensure basic functionalities and security features of the website, anonymously.
Functional
Functional cookies help to perform certain functionalities like sharing the content of the website on social media platforms, collect feedbacks, and other third-party features.
Performance
Performance cookies are used to understand and analyze the key performance indexes of the website which helps in delivering a better user experience for the visitors.
Analytics
Analytical cookies are used to understand how visitors interact with the website. These cookies help provide information on metrics the number of visitors, bounce rate, traffic source, etc.
Advertisement
Advertisement cookies are used to provide visitors with relevant ads and marketing campaigns. These cookies track visitors across websites and collect information to provide customized ads.
Others
Other uncategorized cookies are those that are being analyzed and have not been classified into a category as yet.
SAVE & ACCEPT